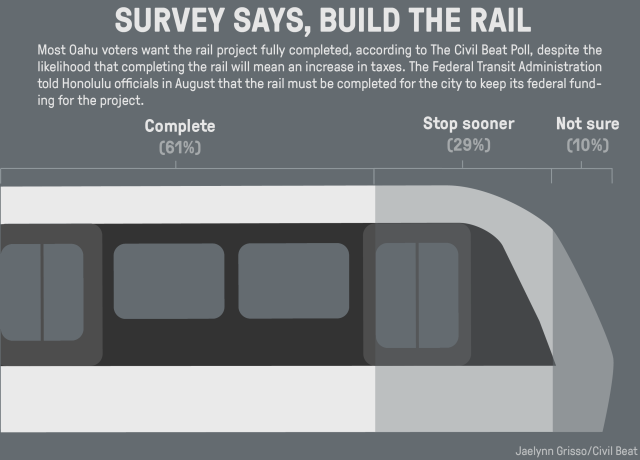 While it’s cost more and taken more time than expected, most Honolulu voters surveyed in a Civil Beat Poll said they want to see the rail line completed. The line is to go from East Kapolei to Ala Moana Center and only 29% of the voters said they wished to end the project and shorten the line. We at Bratton Realty Advisors believe that finishing the line to Ala Moana will provide jobs and much needed housing for the community. This will modernize our city to help us compete with first class cities across the western United States and Asia. The federal government has also urged us to finish the rail line or they want the money they expended returned.

“‘Look, people are anxious to finally see something tangible from it,’ said Matt Fitch, executive director of Merriman River Group, which conducted the poll for Civil Beat. ‘They are not in love with it, but by an overwhelming margin — slightly more than 2-to-1, they say, ‘Yes, we need to complete it, we are not going to stop short.”‘ One of the other questions the survey included was about how to pay for the completion of the rail line. There isn’t enough money to finish it and it is likely that taxes will be raised to help cover some of the costs.