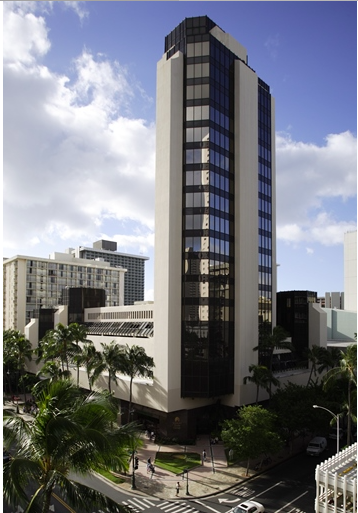 Last week, PBN wrote, “The Waikiki Trade Center, a 22-story, 248,000-square-foot mixed-use high-rise on Kuhio Avenue, will be redeveloped into a 230-room contemporary boutique hotel, the owner of the center confirmed to PBN Tuesday… The yet-to-be-named boutique hotel will include large, upscale rooms and a mix of retailers that will replace the former nightclubs that once occupied the mezzanine level of the Waikiki Trade Center…The repurposing of the Waikiki Trade Center will add new hotel rooms to the market, which has seen the loss of more than 5,000 rooms since 2000. The Waikiki Trade Center is currently less than 20 percent occupied and used primarily as an office building. Coastwood Capital Group said it has been working closely with remaining tenants on both short-term and long-term plans for their businesses during the transition.”

Our take on this article is that Hawaii is following the trend seen first in New York and then in Chicago and Los Angeles of converting office space into upscale hotels. This reduces the supply of office space that is antiquated to the way we work today and the real estate “goes where he demand is to the boutique and business hotel supply.” We believe we will see additional conversions in Honolulu in the next two years.

If you’d like to learn more, read the full PBN article here.