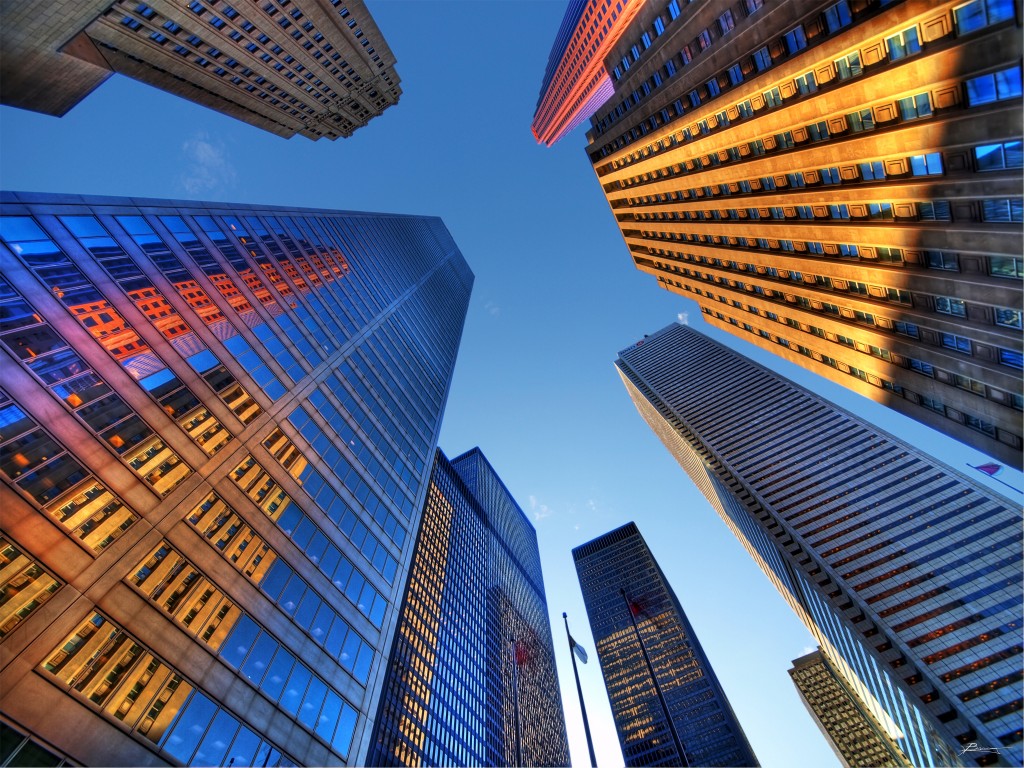 Three developers present the neighborhood board with proposals for a half-dozen new projects.

Kakaako is in the middle of a residential tower development wave that builders see as meeting overwhelming homebuyer demand, but some area residents see as crowding their quality of life.

Well, don’t look now, but another wave is on the way.

Three developers have unveiled plans to seek permits later this year for six more residential towers in or on the edge of Kakaako with more than 1,000 new units.

Four of the new towers are part of the Ward Village master plan by Ward Centers owner Howard Hughes Corp. One is part of the Our Kakaako master plan by Kamehameha Schools. And one is adjacent to Ala Moana Center and the city’s planned rail station there.

The six new projects are on top of 15 towers in or on the outskirts of Kakaako with a combined total of roughly 5,400 units under construction, permitted, in permitting or recently completed.

Local housing market analyst Ricky Cassiday said the newest tower plans reflect an eagerness by developers to meet market demand and perhaps get projects approved before state lawmakers have an opportunity next year to change Kakaako development rules in response to public outcries as they did earlier this year.

“Developers like certainty, and change is in the air,” Cassiday said. “There is the political cycle next to the economic cycle.”

Local economists have said that Hawaii population growth is outstripping housing production, and that even 5,000 condominiums delivered over the next two years will make only a dent in the shortage.

Far fewer homes are being built elsewhere in Honolulu — mainly single-family houses and townhomes in the suburbs — making Kakaako ground zero for housing production on Oahu.

Eugene Tian, the state’s chief economist, recently said that 3,525 new homes need to be added on Oahu annually to match an anticipated population growth of 1 percent, assuming 2.8 people per household. Over the past three years, 1,612 residential units were approved for construction per year on average, which leaves a deficit of 1,913 homes.

“We are behind,” Tian said.

Cassiday agrees that there is strong demand from residents forming families, though he also said added demand is coming from part-time residents and investors outside Hawaii.

“There is an inexhaustible demand from abroad,” he said. “Things have been under­supplied for a very long time.”

The most aggressive developer in Kakaako responding to such demand appears to be Hughes Corp. with its Ward Village plan that envisions up to 4,300 residential units in 22 towers covering 60 acres at Ward Centers.

Hughes Corp. has three towers with 915 combined units already approved and slated to begin construction later this year. On Tuesday, the company told the Ala Moana-Kakaako Neighborhood Board that it plans to seek permits later this year for another four towers.

Two of the new Ward Village towers have a combined 230 units, including some low-rise townhomes, and replace most of Ward Warehouse along Ala Moana Boulevard.

Another tower with 220 units would be just Ewa of the Ward Entertainment Center theaters.

A fourth tower with an undetermined number of units is planned next to a recently announced Whole Foods store mauka of the theaters.

This four-tower second phase of Ward Village also includes retail and a large landscaped pedestrian plaza around which the four towers are planned, according to Nick Vanderboom, vice president of development for Hughes Corp.

“This will be the start of what will be about a 4-acre village green connecting Kewalo Basin up to where the future rail stop will be near where Ross is today,” he told the board.

a couple of blocks away, Kamehameha Schools is working with local development firm The Kobayashi Group to build a 265-unit tower on a 3.5-acre site occupied by Cutter Nissan between Ala Moana Boulevard, Koula Street and a closed-off portion of Auahi Street.

Matthew Pennaz, a Kobayashi Group senior project manager, speaking at the same neighborhood board meeting on Tuesday, said the company considers the block the “crown jewel” of nine blocks in the Our Kakaako master plan.

“We’re excited to be part of the community,” he said.

Pennaz said a price range for tower units hasn’t been determined yet. Cassiday, however, said a tower on that site most certainly would be a luxury product.

Both the Our Kakaako tower and Ward Village towers will need approval from the Hawaii Community Development Authority, the state agency regulating development in Kakaako.

Existing residents in the area, many of whom live in condos next to proposed towers, have complained about the agency “rushing” public hearings on tower permits over the past couple of years, and contend that more towers can’t be supported by infrastructure such as roads and sewers.

HCDA officials insist that sufficient sewer capacity was created to handle all the proposed development under a 4-decade-old vision to concentrate dense urban development in Kakaako that relieves pressure on rural and agricultural lands on Oahu.

The city considers sewer and water connection requests per project, and has approved all of them to date.

The developers will need to produce traffic studies and mitigation plans. The projects are likely to slow traffic in the area, but not to an extent that would keep them from proceeding, based on past decisions regarding other developments.

The issue of rapid development in Kakaako led to several bills introduced in January at the Legislature, including one calling for a moratorium on development in the area and one abolishing HCDA. Only one bill passed, and will reconstitute the agency’s board of directors next year among other more minor changes.

Larry Hurst, area neighborhood board chairman, is supportive of HCDA’s mission established by the Legislature in 1976.

“All those years ago, Kakaako was (thought of as) the place to get people to live in the (primary urban core),” he said. “When it finally comes (close to happening), only the newbies start talking. I ask people, ‘Where have you been for 37 years?’ It’s like, you can’t move in next to a hospital and then start complaining about the ambulance.”

The third new project presented to the neighborhood board Tuesday is a 234-unit tower slated at 1391 Kapiolani Blvd. next to Ala Moana Center a block Ewa of the Nordstrom store fronting Kapiolani, Kona Street and Kona Iki Street just outside Kakaako’s Piikoi Street border.

In 2007, an affiliate of South Korea-based SamKoo Development Co. Ltd. bought the 1.4-acre site that formerly hosted a car dealership and announced plans for a luxury condo tower. However, Hawaii’s real estate market was approaching a turndown in the face of a recession and the project was put on hold.

Lowell Chun, a consultant for SamKoo, told the board that the developer has revised its plan to fit with the city’s new rail station that will be the Honolulu terminus of the line from Kapolei.

Chun said SamKoo is offering to provide a slice of its property along Kona Street for rail use, and would like to create a public area with commercial shops on the tower site integrated with the city’s rail station.

“We are right there,” he said. “What we would like to create is a landmark building for this landmark location — something that signifies that this is someplace special.”

Chun said SamKoo hopes to submit a permit application with the city within the next few months under interim transit-oriented development rules pending before the City Council, provided the rules are adopted.

A maximum height under interim rules being considered would be 450 feet, up from the site’s existing 250-foot limit, though Chun said the 1391 Kapiolani tower is planned to rise 420 feet.

The Neighborhood Board did not vote on the projects.

Developers of the three projects all expect to seek permits this year but did not project construction timetables if their towers are approved. 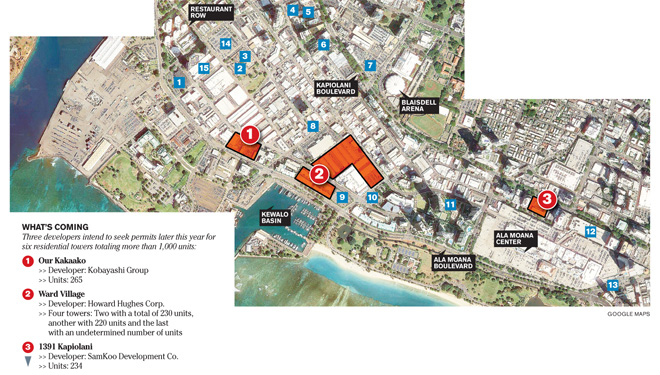