The revival of construction on a 30-story mixed-use tower in downtown Portland, Ore., is more than just a feat for family-owned developer TMT Development Co. It is an indication that demand for new office space, which had been limited to the nation's largest markets, is spreading to midsize cities.

TMT, based in Portland, initially began work on the $175 million office building in 2008, then halted the project during the depths of the recession in 2009 because it couldn't secure financing. Construction resumed last month after TMT found law firm Stoel Rives LLP to take nine of the 13 floors of office space and secured $118 million in construction financing from a debt fund run by Pacific Coast Capital Partners LLC.

"We needed to be patient," said TMT's president, Vanessa Sturgeon, adding that the company had to wait several years until there were large tenants with leases expiring that would consider new space. Ms. Sturgeon is the granddaughter of Thomas P. Moyer, who founded the development company after he sold a chain of multiplex movie theaters in 1989.

Also key to the restart: apartments. While the 2009 version of the tower called for just office and retail, TMT replaced 15 of the office floors with rental apartments, given that demand in the area for office has been stagnant but has been growing for apartments in Portland and throughout the U.S. 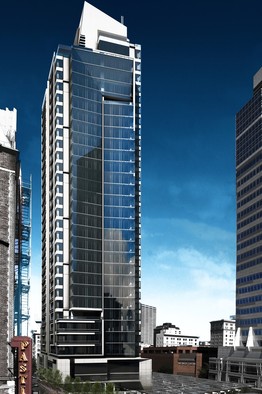 U.S. office construction has been slow to re-emerge after grinding to a near-halt in the economic downturn, and new projects generally have been concentrated in a handful of cities where rents and prices have seen strong growth.

Walter Page, director of office research at real-estate data firm CoStar Inc., estimates that 60% of current construction is in five metropolitan areas including New York and San Francisco, while those five cities would typically garner just 35% to 40%. That is largely because office-rent growth across the country has been sluggish, and lenders and investors have been reluctant to go outside of large cities they perceive as safe investments.

Those attitudes are starting to change as the economy mends and office vacancies edge downward, lifting demand for office space in cities that have had little supply in recent years.

In Milwaukee, for instance, Northwestern Mutual Life Insurance Co. is planning to build a 32-story tower on the edge of the city's downtown. And landlord Brandywine Realty Trust announced on Oct. 31 that it would start work on a 47-story apartment and office tower in downtown Philadelphia after signing a lease with chemical company FMC Corp. for nearly half the building's 575,000 square feet of office space.

The return of construction "is a positive development, but we still have a long way to go before we can say that the level of office construction is healthy," said Robert Murray, McGraw Hill's vice president of economic affairs.

The Portland project nearly got off the ground in 2008, when TMT had signed leases for 55% of the building's space. But construction lenders at the time wanted TMT to hit 65%, a bar the company couldn't surpass, Ms. Sturgeon said.

So after spending about $50 million on the land and foundation, the company mothballed the site, which sits across from a bustling Nordstrom's department store. TMT pulled out the construction crane and left behind a concrete hole with a partially built skeleton of an elevator bank at its center, steel rebar poking upward.

Since then, Ms. Sturgeon has been hunting for tenants. While she remained bullish on the project, the uncertainty "was definitely one of those things that makes you lose sleep," she said. Aiding the project was an improving market for commercial-real-estate lending, giving Ms. Sturgeon more options for lenders with lower rates than she would have seen a year to 18 months ago.

"It was a much more competitive environment for financing," Ms. Sturgeon said. "We received a lot more interest than we had in years prior."

Lenders "have become less scared of unknowns as the markets have shown health," said Erik Flynn, a senior vice president at Pacific Coast Capital who oversaw the project's construction loan. Still, Mr. Flynn said, the Portland tower was alluring for the lender because it had so much preleasing, and it is unlikely the fund would have backed a project without any tenants.

Outside of cities where rents and values have been rising rapidly, he said, "you just can't justify speculative development."