Informative article on Hawaii hotel transactions in 2013.  Thank you Allison for my mention in this story. 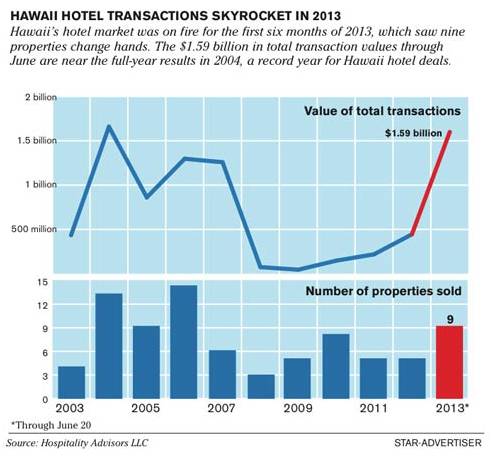 Sales of Hawaii hotels are on a blistering pace with the value of all transactions in the first half of 2013 reaching $1.59 billion, nearly matching the total for all of 2004, a record year for hotel deals here.

Joe Toy, president and CEO of Hospitality Advisors LLC, and other hotel industry analysts say the data reflect significant investment interest in Hawaii hotels that has not been seen in decades — since the frenetic pace of the Japa­nese bubble economy.

Buyers are coming mostly from the New York financial market, but also from Japan, China and Korea. Some represent sophisticated hotel companies while others favor short-term investment since their primary businesses are outside the hotel sector.

"We began to see hotels start to trade again in 2012, but it really accelerated in 2013," Toy said. "We finished June essentially at the same level as our best year ever. Knowing what's on the table and what's in the pipeline, we'll have a phenomenal year that far exceeds the 2004 level."

Mike Hamasu, director of consulting and research for Colliers International, said hotel sales are ramping up so much this year that they could account for as much as 40 percent to 50 percent of this year's commercial sales volume.

"The sharks are definitely circling," Hamasu said, adding that hotel deals this year are expected to help drive the sales volume for Hawaii's commercial real estate market up another 20 percent to 25 percent over 2012, which was already 80 percent stronger than 2011.

That's especially true of Oahu, which, according to STR Global, had the highest occupancy rates and the largest growth in average daily rate, revenue per available room and room revenue in the United States through June.

"Roughly 8.5 out of 10 rooms every night for the first 180 days were occupied on Oahu," Freitag said. "No other market even comes close to that performance."

Oahu far outperformed the U.S. hotel industry as a whole during the first six months of the year. Through June, nationwide occupancy rose 1.5 percent to 61.8 percent, while the average daily rate increased 4 percent to $109.49 and revenue per available room grew 5.6 percent to $67.69.

"We're seeing record transactions and record pricing," said Mark Bratton, a Colliers International vice president. "However, it's a healthier cycle. In the past, they were literally giving money away and we were seeing deals made up of 80 to 90 percent debt. Now, there's a lot more discipline in the market and a lot more equity. The typical deal now is about 50 to 70 percent debt."

While ToY declined to release the nine names on his list of top trades because some of the data are proprietary, the Star-Advertiser has published a range of sizable deals this year:

» Among the largest transactions was the $1.5 billion sale of the Grand Wailea and three other luxury U.S. resorts to a Singaporean government investment fund. According to Bloomberg News, a bankruptcy judge in New York approved a plan in February that allowed the deal to proceed.

» In April, the Star-Advertiser reported that Blackstone Group LP intended to purchase the leasehold interest in the Hyatt Regency Waikiki Beach Resort and Spa for $450 million.

» Last month, the newspaper reported that Maryland-based RLJ Lodging Trust was buying a 99-year lease on the 399-room Courtyard by Marriott Waikiki Beach for $75.3 million from Highgate Holdings Inc., which had purchased the hotel and the land under it for $125 million in April.

» The Star-Advertiser also reported in June that the fee-simple interest in the 426-room Hyatt Place Waikiki Beach had been sold for $138.5 million.

Other deals that could be included in Toy's count are the Waikoloa Beach Marriott Resort and Spa and the Maile Sky Court, which are changing ownership, according to notifications from the state Department of Labor and Industrial Relations. The Star-Advertiser also published a report from Bloomberg News in March that Lehman Bros. had planned to sell The Residences at Kapalua Bay.

"I've got the Waikiki Beachside Hotel under contract," he said. "There was tremendous interest and we had a very short marketing period. They selected a buyer in 40 days."

Bratton said he also expects to see strong investor interest in the Kauai Lagoons Resort, which he will market through September.

"Buyers are seeing that they have the ability to increase their incomes very quickly," Bratton said. "For example, Vive Hotel Waikiki just had their grand opening. In that case, the buyers came in and turned it from an older '70s hotel to a hip, modern place with all new furniture and bedding. By doing that, they raised the rates by 25 percent."

Dan Howery, manager of Vive Hotel Waikiki, said the property opened on Tuesday with an average rate of $169 a night.

The hotel, which was formerly the Continental Surf Hotel, was closed for more than two years while Korean owner Sylvia Lee funded a multimillion-dollar infusion.

"It was a budget hotel, but we've transformed it into a boutique hotel in the mid-to-upscale range," Howery said.

Bratton also pointed to the Maile Sky Court and Shoreline Hotel Waikiki as exemplifying this stage of the boom, which is mostly about acquisition, reinvestment and repositioning.

Toy said he anticipates another $1.5 billion in Waikiki reinvestment will be added over the next five years to the $3.5 billion that was spent during the last boom.

"The reinvestment in Waikiki is what has driven the state's economy forward," Egged said.

As a result of the Waikiki improvements, Egged said his office is fielding weekly calls about various properties.

"A lot of it is being driven by changes in the Waikiki Special District over the last few years, which have opened up opportunities for investors, especially those that want to develop some of the smaller properties," he said.

"There are plans and discussions being held by a number of major brands to develop expensive hotels," he said. "If we continue increasing our hotel use, I'd say the tipping point statewide would be about a year or two out. However, it's probably much closer for Oahu. We're not quite there yet, but it's getting close."