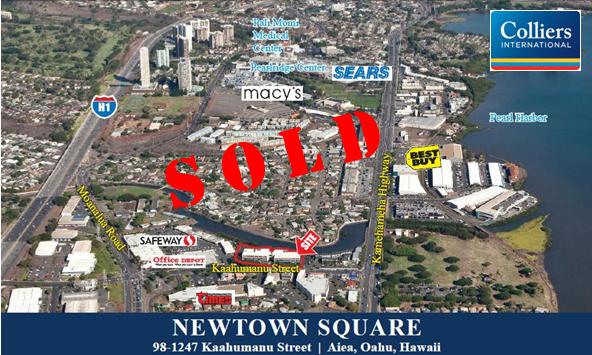 AIEA — Kamehameha Schools just sold their 61,690 square feet professional office building in Aiea, Oahu for $15,250,000. Hawaiian Island Homes (Peter Savio) purchased Newtown Square with plans to convert this 3-story multi-use building into medical office condominiums. Savio also plans to build an additional 4 or 5-story building which will include 45,000 square feet of medical office space and 300-400 parking stalls on property. “Many mainland cities are starting to see an increase of doctors establish their own businesses in office condos because they recognize the value in earning equity and investing in their practice,” said Mark D. Bratton of Colliers International, who represented Kamehameha Schools in the sale.

With more than half of the existing tenants being medical related and located less than 1.5 miles from Pali Momi Medical Center, Colliers strategically marketed the building to investors with an interest in medical office buildings and to partial owner-users. Newtown Square will be the first and only fee simple office condominium project in Leeward Oahu, thus providing a truly unique opportunity for medical professionals in the area. The physicians will benefit from the existing dense population in the surrounding area as well as the ever growing housing population from the west. The future condo owners will also benefit from its close vicinity to Pearlridge Center, the 1.2 million square foot regional mall and the largest enclosed shopping center in the State.

Newtown Square was sold after Kamehameha Schools determined that it was a non-strategic property within their portfolio. A year ago, Kamehameha School decided to sell a couple of their properties allowing them to focus on their major developments in the Kakaako, University, and Kalihi areas.