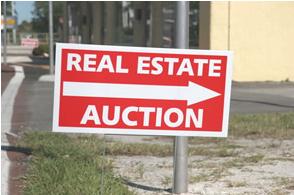 Ready or not, the city will auction off a total of 6 buildings on May 8th if property taxes are not paid. Read more here:

The city will seize and sell a derelict three-story Waikiki apartment building if its owners do not pay the taxes on the property that has sometimes been used by squatters and drug abusers in recent years.

George and Peggy Yamashita, who own the vacant building at 2240 Waikolu Way, owe the city $113,636 in back taxes, interest, penalties and costs.

The property, along with five others outside of Waikiki for which owners owe the city a combined $33,043, will be put up for sale at 9 a.m. May 8 at the Mission Memorial Auditorium, 550 S. King St.

The city schedules a sale for failure to pay real property taxes once every fiscal year, said Louise Kim McCoy, Mayor Peter Carlisle's spokeswoman. Taxes must be at least three years' delinquent for a property to go to auction, McCoy said.

City officials had posted a government seizure notice outside the Yamashitas' property, but McCoy disputed the use of the word "seize" and said the sign was hung in error and would be removed.

"The city does not seize properties," she said. "Instead, the city sells properties for failure to pay delinquent real property taxes."

Regardless of what the city calls the pending action, many members of the surrounding neighborhood say it is long overdue.

"Thank heavens the city is finally taking some action. The building has become a magnet for undesirables," said Bill Lofquist, whose Royal Kuhio condo overlooks the trash-riddled property, which the city has appraised at $1.58 million.

George Yamashita, whose taxes are more than three years in arrears, could not be reached for comment. His son Les, who was clearing debris from the building on Friday, would not comment. However, while he was there, Les Yamashita was approached by two potential buyers and by his business neighbor, Marc Litchfield, who complained about the squatters in Yamashita's building.

"I see (squatters) coming and going like cockroaches," said Litchfield, who is the contract agent for Makai Moped Rentals, across the alley from the Yamashita property. "It's bad for business. They don't want people to know they are staying there so they intimidate them."

The Star-Advertiser reported on the condition of the building on Aug. 22 as part of a series on homeless squatters in Waikiki. Residents and nearby businesses, including the Marine Surf Hotel, also have complained about the property to the city planning department, the police, fire and health departments.

Over the years, the police department has responded to multiple calls at the property, according to police spokeswoman Michelle Yu. The city Department of Planning and Permitting also has cited the owners, McCoy said.

Recent city actions at the building have included a notice of violation in March 2011 for overgrowth and litter constituting a fire, health and/or safety hazard, she said. Another notice of violation was issued on Nov. 7 for unsafe building/structures because inspectors found the property vacant and dilapidated and noticed that the doors on the second floor were open, McCoy said. The owners corrected the violations on Dec. 30, and settled their fines for $650 on March 12, she said.

Mark Bratton, vice president of the investment properties division for Colliers International, said if the property is auctioned it could interest as many as a dozen investors.

"It's a small, bite-sized piece so it lets a lot of investors into the game," Bratton said.

Recent amendments to the 1976 Waikiki Special District could make the property more attractive to buyers, he said. "It can be built-out bigger and fuller," Bratton said.

Owners of lots under 10,000 square feet were so hard hit by past Waikiki building rules that only three small lots were developed or redeveloped in the Waikiki Apartment Precinct in the past three decades. Without investment in the small lots, which make up the bulk of Waikiki, eyesores have grown.

"(2240 Waikolu Way) was probably a lovely jewel in Waikiki in the 1940s and 1950s, but everything grew up around it," said Stephany Sofos, a Waikiki-based retail analyst. "Now, it's in bad condition. People can get into it, so it has become an attractive nuisance."

If the property is auctioned, the total amount owed to the city is the upset price or starting bid, McCoy said. Last year, two owners paid their delinquencies in full before the sale and two were auctioned, she said.

"The city got the total amount it was owed of $31,135.47, with the surplus going to claimants entitled to the balance," McCoy said of the two auctioned properties.

Property owners also have a year to redeem their property after it has been sold at auction by reimbursing the purchaser for the sale price and all costs and expenses, including interest at the rate of 12 percent a year, she said.

Jeff Merz, an urban planner and member of the Waikiki Neighborhood Board, is among those who hope that the property goes to an investor, who will raze it or transform it into something better.

"It's not just an eyesore if it was harboring drugs and junkies and trash and vermin," Merz said. "It's been detrimental to nearby property values."

New investment would add to the $1 million enhancement already taking place at the nearby Royal Hawaiian Market Place, said Lofquist, who is also a member of the Waikiki Neighborhood Board.

The property could be redeveloped as a commercial mixed-use building with retail on the bottom and residential above, Bratton said. The building's limited parking is offset by its location in a good-walking neighborhood, he said.

Surrounding business owners might buy the building to expand their operations or add parking, Sofos said.

Any change would be an improvement, Litchfield said. "I'm sure all the business owners around here will be thrilled that something is finally going to happen to that building," he said.