Trend of Companies Packing More People Into Less Space Picks Up Pace; A 'Tiny Library' at One Law Firm

As the office-space market slogs along in a slow recovery, landlords face another hurdle: shrinking tenants.

Companies looking for cost savings are increasingly packing more employees into less space, a trend that is helping cause U.S. vacancy rates to linger at high levels even as employers add jobs in the slowly expanding economy. 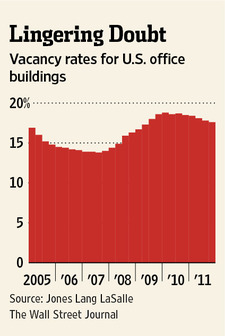 Panasonic Corp., for example, is planning to move into a new 280,000-square-foot U.S. headquarters in Newark, N.J., next year. But it is taking significantly less than the approximately 575,000 square feet of office and labs at its current campus in Secaucus, N.J., that is owned by Hartz Mountain Industries Inc. The electronics company says it isn't reducing its head count, but is simply reconfiguring its offices.

Employers gradually have been taking up less space for decades, but real-estate professionals say the drive to use less space has picked up since the economic downturn, as companies look to trim costs where they can across their budgets. Workstations are shrinking and private offices are disappearing, replaced by cubicles with low walls, and more employees are working remotely.

Companies today are taking space with an average of about 200 square feet per employee, down about 20% from a decade ago, said Alan Nager, an executive managing director at brokerage Newmark Knight Frank who advises companies on their real estate. The amount of space is continuing to shrink, he says.

The trend is slowing the recovery of the office market. Since office vacancies hit a post-recession peak of 18.8% in 2010, the market has improved only slightly, according to brokerage Jones Lang LaSalle. The vacancy rate was 17.6% in the fourth quarter, still well off the 13.8% rate during the height of the boom in 2007.

Office landlords have been encouraged lately by news of job growth. They also are hoping that the dearth of new construction will give the market a boost.

But the efforts by tenants to do more with less remain a hurdle. "The way that people use space is changing," Richard Clark, chief executive of the large office landlord Brookfield Office Properties Inc., said on a conference call with analysts earlier this month.

Even when the economy kicks into a higher gear, the trend is expected to continue. "Given increased efficiency of space usage by tenants plus the limited amount of construction put in place at the peak, it will take more than the previous peak level of employment to reach the previous peak levels for occupancy and rent," analysts from Moody's Investor Service wrote in a report last week.

To be sure, not all companies are overhauling their space. Many tenants simply renew their leases when they come due, which makes it harder to rethink their approach to workspace than if they were moving to a different building. 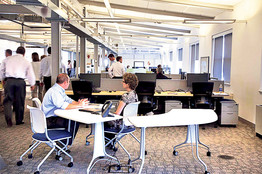 But some industries are both contracting and using less space per employee. For example, many companies in the financial-services sector—a traditional driver of the office-space market—have been laying off workers and looking for more-efficient workspace.

"It's kind of all about cost control at this point for that industry," Brookfield's Mr. Clark said.

Landlords of top space are particularly concerned about law firms, which for decades devoted large swaths of their offices to filing cabinets and libraries, as well as desks for support staff. But lawyers need fewer assistants, and technology is shrinking, or making obsolete, the need for paper storage.

"We redesigned our space. We have a very tiny library now," Mr. Robbins said.

The trend isn't confined to the private sector. The General Services Administration, which administers leases and office space for much of the federal government, is in the process of renovating and expanding its headquarters building in Washington to make it far denser amid an era of fiscal austerity.

Should the whole expansion and renovation project be completed—the second phase isn't yet funded—the 800,000-square-foot building is expected to hold about 6,000 employees, up from 2,400 held in the building before the renovation, which was about 700,000 square feet. That would allow it to stop leasing at three other locations in the Washington region.

The redo calls for replacing tall cubicle walls and offices with denser seating and low or no walls in between employees. It would also relying on a concept known as "hoteling," where employees don't have permanent desks, allowing the agency to have more employees than desks given that many are out of the office on a given day.