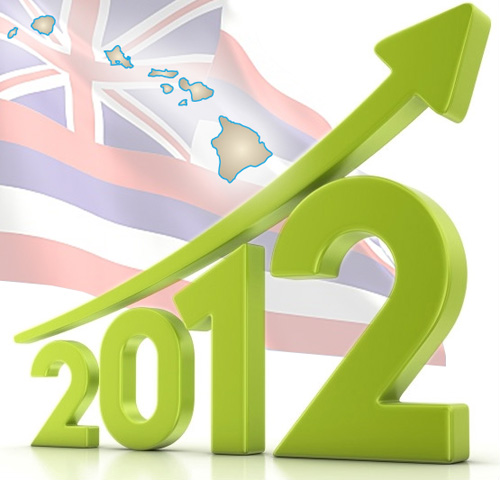 3 Reasons Why 2012 Will Be A Great Year For Hawaii Investment Real Estate1) Influx of U.S. and foreign investors are looking at Hawaii.
2) Increasing volume of distressed real estate that will go to market in 2012.
3) Retail sales, arrivals of East and West-bound visitors, and job growth will all be positive.

Investment Market and DistressIn 2011, the Hawaii Commercial Real Estate market took off with flying colors as cap rates compressed till the day of the devastating earthquake in Japan. After the earthquake, U.S. and Europe’s economies were on a brief roller coaster ride but managed to land softly.
In 2012, we will see more investment transactions, particularly larger deals in Hawaii. While 2011 was a year of $1-4 million transactions with very few deals over $10 million, 2012 will provide significant improvement as the overall volume increases. Japanese investors will come back to Hawaii and sellers will begin closing deals with China and Korea. With a projected increase in airlift of 16% for 2012, we are poised to see a lot of new investors this year.
Investors will see another benefit in the Hawaii market. There are $70 billion worth of CMBS mortgages that were made in 2006 and 2007 which will be due this year and need refinancing. Hawaii has begun to see its share of these transactions. With all the healthy local lenders and servicers willing to hold on for limited ownership period, we will see a significant percentage of transactions that are earmarked as distressed real estate in Hawaii. Hawaii’s positioning in the middle of the Pacific as a tropical paradise (where now you can do business- thank you APEC) will pay great dividends as we play off both the U.S. and Asian markets in 2012.

OfficeSoft demand continues in the urban high-rise office market. With a slow but steady climb in job growth and a surge of entrepreneurs and remote workers working out of their home and local coffee shops, very little new office space is being absorbed. Though numbers show a rise in employment last year, most of this was outside of typical office use.
We expect the office vacancy rates in Hawaii to increase to a little below 14% by year-end 2012. Many investors are concerned about the costs to reshuffle, relocate, and upgrade tenants within their office buildings. For these reasons, investments in office properties will continue to be the slowest category of Hawaii commercial investment properties.

Retail and Shopping Centers:The retail market is hanging tough. It is driven by tourism and new visitors landing on our shores. The all-elusive retail dollar seems to be passed from Waikiki to the suburbs, trickling down to our residential and neighborhood shopping districts. The vacancy rates will likely remain in the mid 4% range as no new supply is expected to go to market. There seemed to be a minimal amount of rental increase in our higher-end shopping centers last year. Online shopping is making a significant dent now in the retailers’ format and size of their stores. It will be interesting to see what retailers will come up with to entice shoppers from both channels.
Although investment in Hawaii shopping centers can be profitable, it is rare to find one on the market. It is even more difficult to find a shopping center that is grocery-anchored and fee simple. From time to time, we do see free-standing retail projects or unanchored projects that will continue to sell due to the migration from stock market to hard assets. Anchored projects will trade at very low cap rates when they come available.

IndustrialThe industrial market is also a bit stagnant as supply is limited. Vacancy rates are hovering at 4% and without new supply of space, rates will stay stable. A small migration of tenants into the core of the city over the past 2 years has increased occupancy rates. A handful of troubled industrial projects have sold and recapitalized and are now being leased individually.
Investment into industrial property in Hawaii will continue to stay strong by owner-users. The demand from owner-users is more saturated in Hawaii because of the lack in interest from large industrial market and low supply of high-quality structures. The rates of return are relatively low compared to the western United States which keeps many investors on the sidelines in this target market area.

Multi Family MarketApartment rents rose for the past 18 months. Due to a small climb in job growth and mortgages harder to come by, demand to rent apartments in Hawaii will continue to rise. We expect apartment rents in Oahu to increase by 5% in 2012. Small apartment buildings will continue to trade at a healthy pace. Cap rates for Hawaii apartment buildings still carry the lowest initial rate of return, in the 5-6% area. This comes from rents rising and investors being very comfortable with the property type. This is evidenced by apartment deals being the greatest number of transactions in 2011.

Hotels and ResortsThe hotel and hospitality market is coming back strong. With continued rate appreciation through 2014, cash flows will increase on these properties. Occupancy is very high in Oahu and Maui, and is starting to build in Kauai and the Big Island. Although we are unable to disclose the name of the hotel, a new and desirable hotel is under construction and will be up and running in 2014. We expect continued pressure on rates in the neighborhood of a 4% increase a year.
Investments in Hawaii hotels will be led by very strong international demand. Although there has been a shortage of high-quality hotels and resorts for sale in the state of Hawaii, the marketplace has undergone a restructuring with debt which resulted in only a few foreclosures and bankruptcies over the past 3 years. We expect an uptick in sales of hotels in Hawaii in 2012.

Foreign Investment in Hawaii Real EstateForeign investors, particularly from Asia, are seeking investment in the form of real estate in Hawaii. With numerous Korean conglomerates and Chinese investors searching and bidding for properties in 2011, we expect they will actually purchase properties in 2012. Japanese investors are making resurgence with the strong Yen. Although they are interested in many types of properties, they are most interested in hotels, resorts, and shopping centers.